PROJECT TYPE:
Brand creation & development
OBJECTIVE:
Start a creative entity with cohesive branding and styling to release designs and illustrations under and eventually transition into clothing drops as well.
SOLUTION:
Dissolve started out simply as a creative outlet for me to release thematically and aesthetically cohesive illustrations relating to ideas of community and how I viewed the world around me. Then, after running its initial course, it was time to expand the possibility of what Dissolve could be.

Initially revolving solely around posters, digital prints, stickers and zines as available products, Dissolve was heavily centered around concepts of community unity and DIY. Having been part of various subcultures that revolve around these same ideals, Vezael knew it was imperative to keep DIY and people power at the core of Dissolve.

Intended to supply the kinds of people I sees in myself and those around me, Dissolve is a brand meant for the creative and unrefined. Dissolve is feeling the human touch, seeing the perfect in the imperfect, and existing outside common conventions. Dissolve is for the graffiti writers, underground musicians, street skaters, political printmakers, and anyone who values the unity of the people around us in doing what we love despite its lack of digestibility to the common public.
BRAINSTORMING & LOGO PROCESS 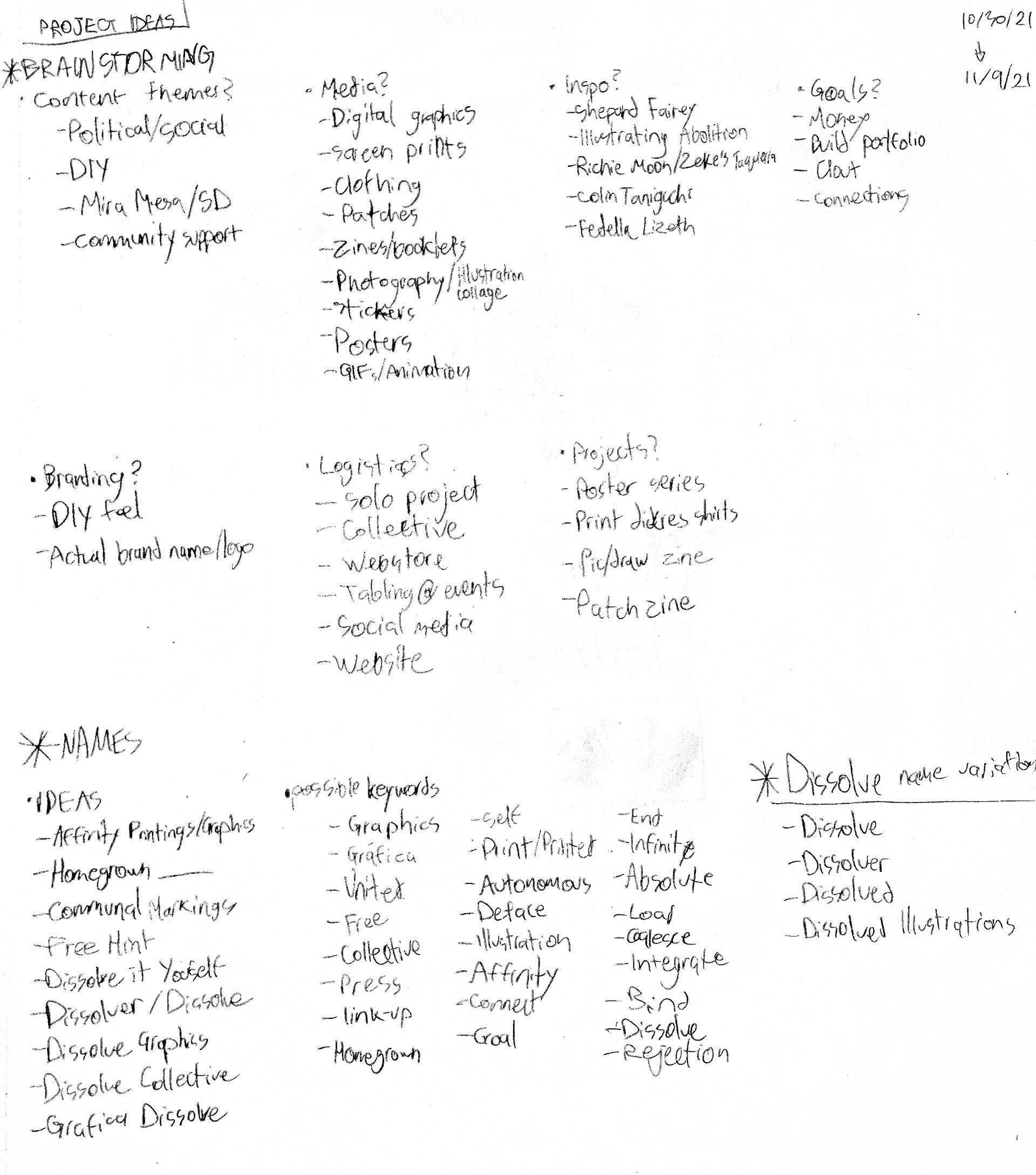 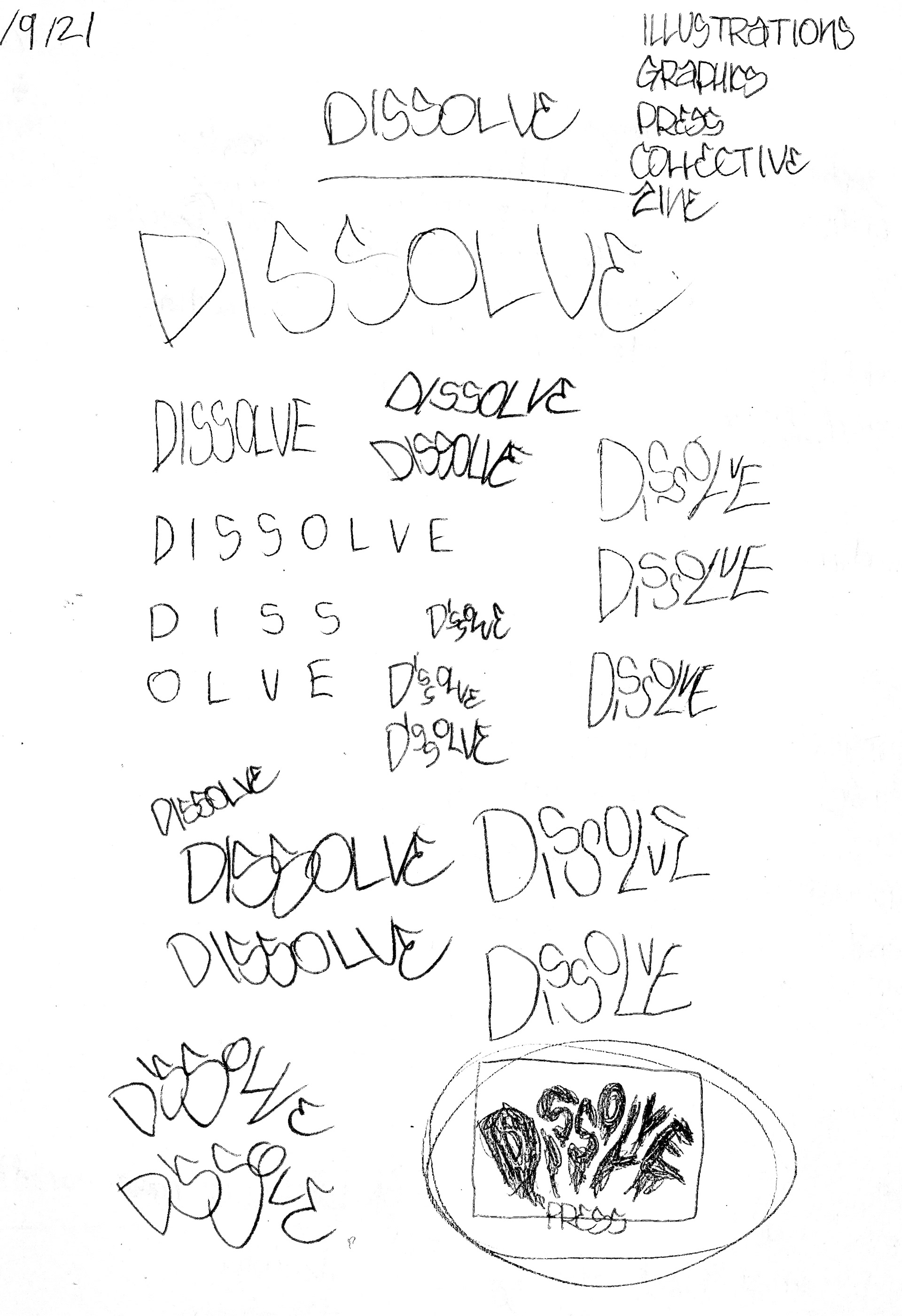 I really wanted to start a project and have it be something home grown, with a very localized feel where much of the subject matter would either be targeted specifically to my area or contain ideas relatable to other peoples' localities. I wasn't exactly sure what kind of ideas I wanted to depict, but I knew I wanted to revolve around themes of community and DIY (do it yourself). I then decided to brainstorm names, settling on Dissolve. I chose Dissolve for its implication of the idea of 'doing away with', which I could then apply to many ideas such as exploitation and inequality in my community.
FINAL BRANDING ELEMENTS

I wanted to have the logo just be stylized type that could resemble aesthetically many of my illustrations. With the blobby letterforms, interweaving letter placement, and black outline dividing the two colors, this logo could easily be integrated with any drawing or graphic I would produce for this project. I also developed a droplet shaped motif that is a visual representation of the word 'Dissolve' to be used in conjunction with the main logo or to take its place in certain cases.
For the colors, I wanted a scheme that also resembled my usual color palette, but also one that drew attention. I chose a greenish yellow as the main color with a slightly purplish blue as a secondary color with a yellowish orange as a third color. I've always loved colors that weren't quite one specific hue, rather ones that are sort of in the in between space of two common colors, basically just tertiary colors. I also included the use of a rich black since I love including black outlines in my pieces or using a solid black backdrop.
HAND TYPE PROCESS & OTHER IDEAS 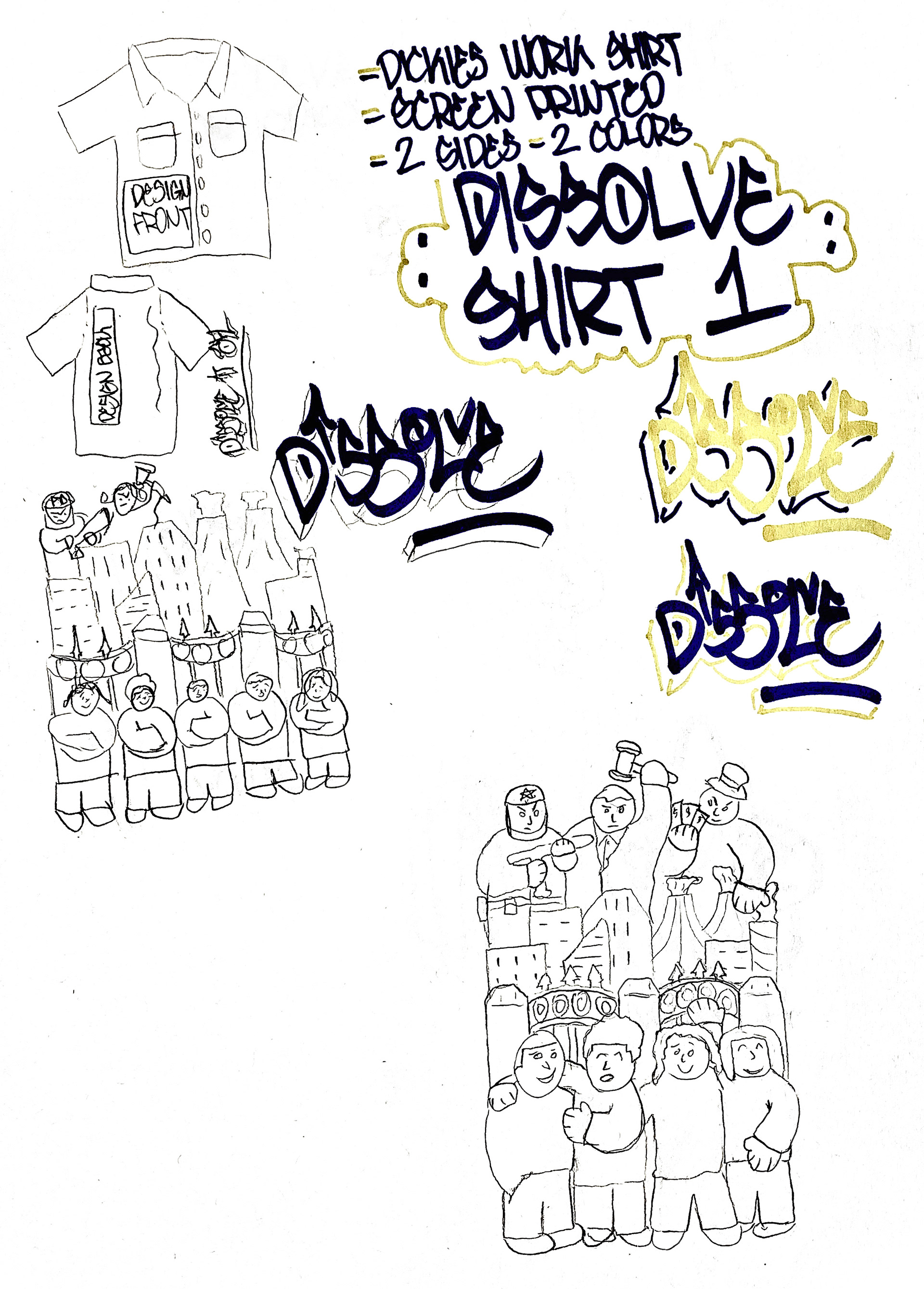 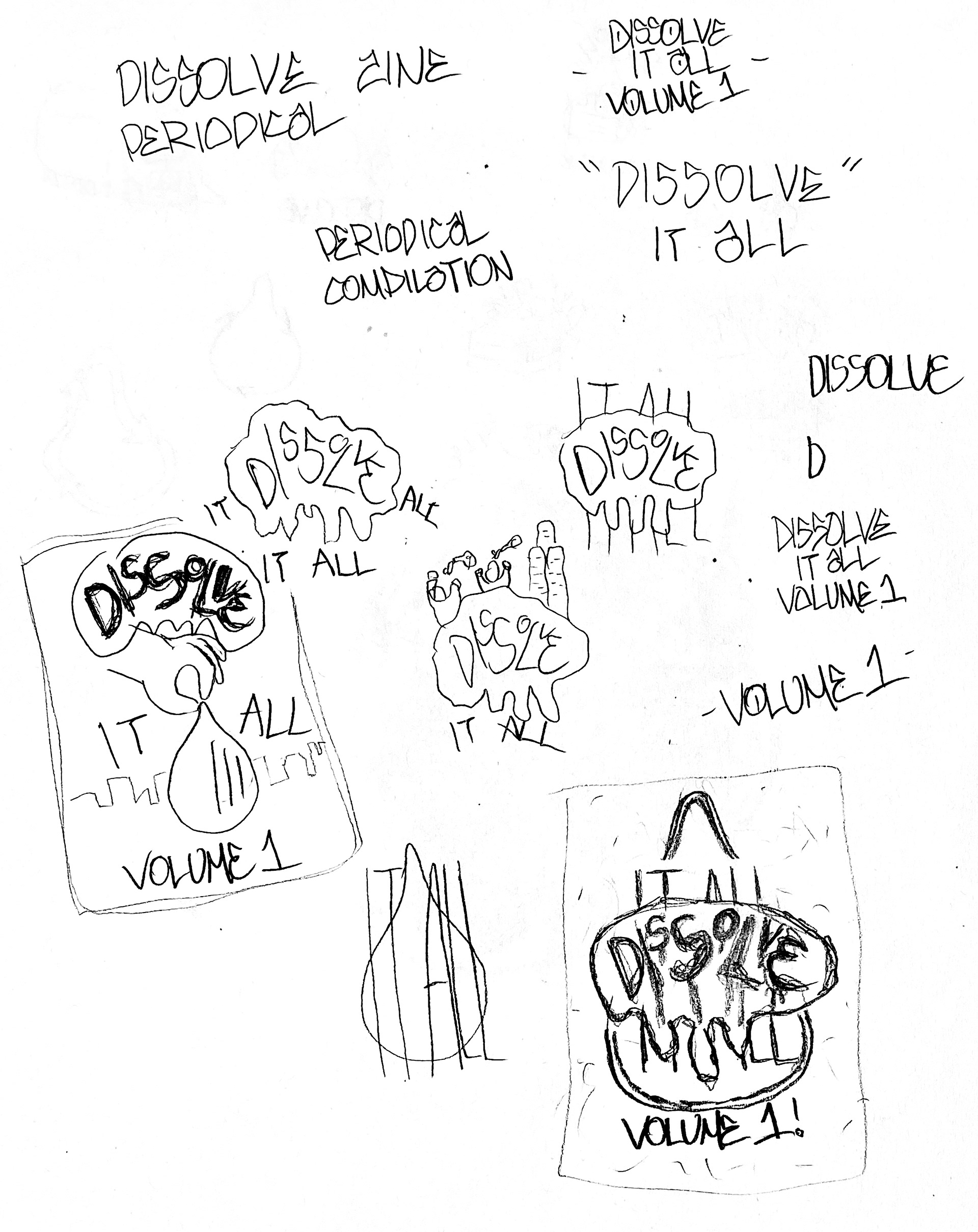 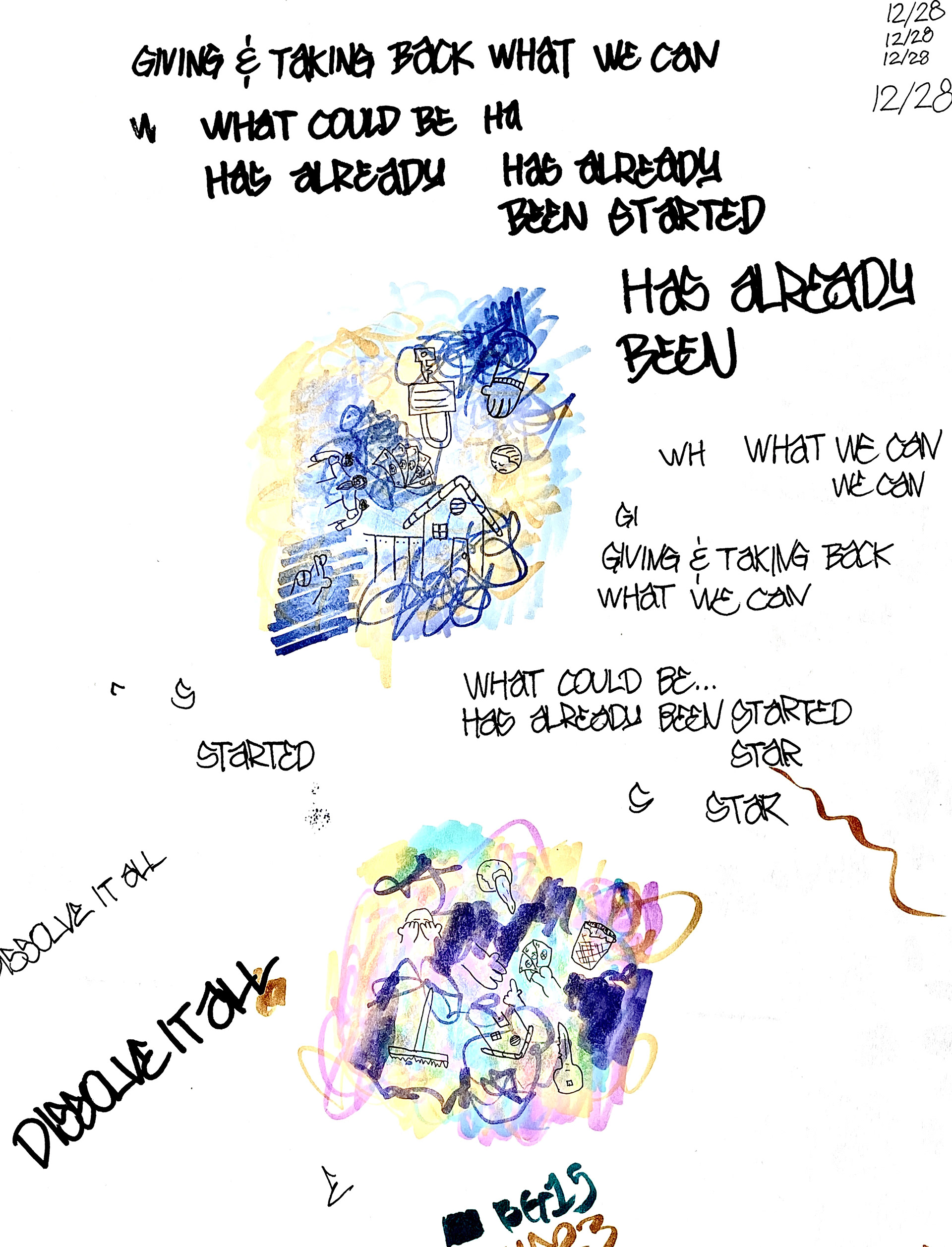 The presence of hand drawn material is very important to me for this project. From creating type by hand, or having the illustrated content appear handmade and imperfect, the aesthetic of Dissolve is to feel very DIY in all aspects. I also created the textures that are used in these pieces by hand by creating scribbled patterns with black pens and different colored alcohol markers in order to have complete control over the texture overlays I used, therefore adding a grittier and more interesting look to the illustrations in this project.
TEXTURE APPLICATIONS

These are some samples of the textures created with the method mentioned above using markers and pens, which I then run through a gradient map in order to use only the brand colors while also creating a very gritty and sort of messy look to use as backgrounds or overlays for images and illustrations.
ZINE COVERS 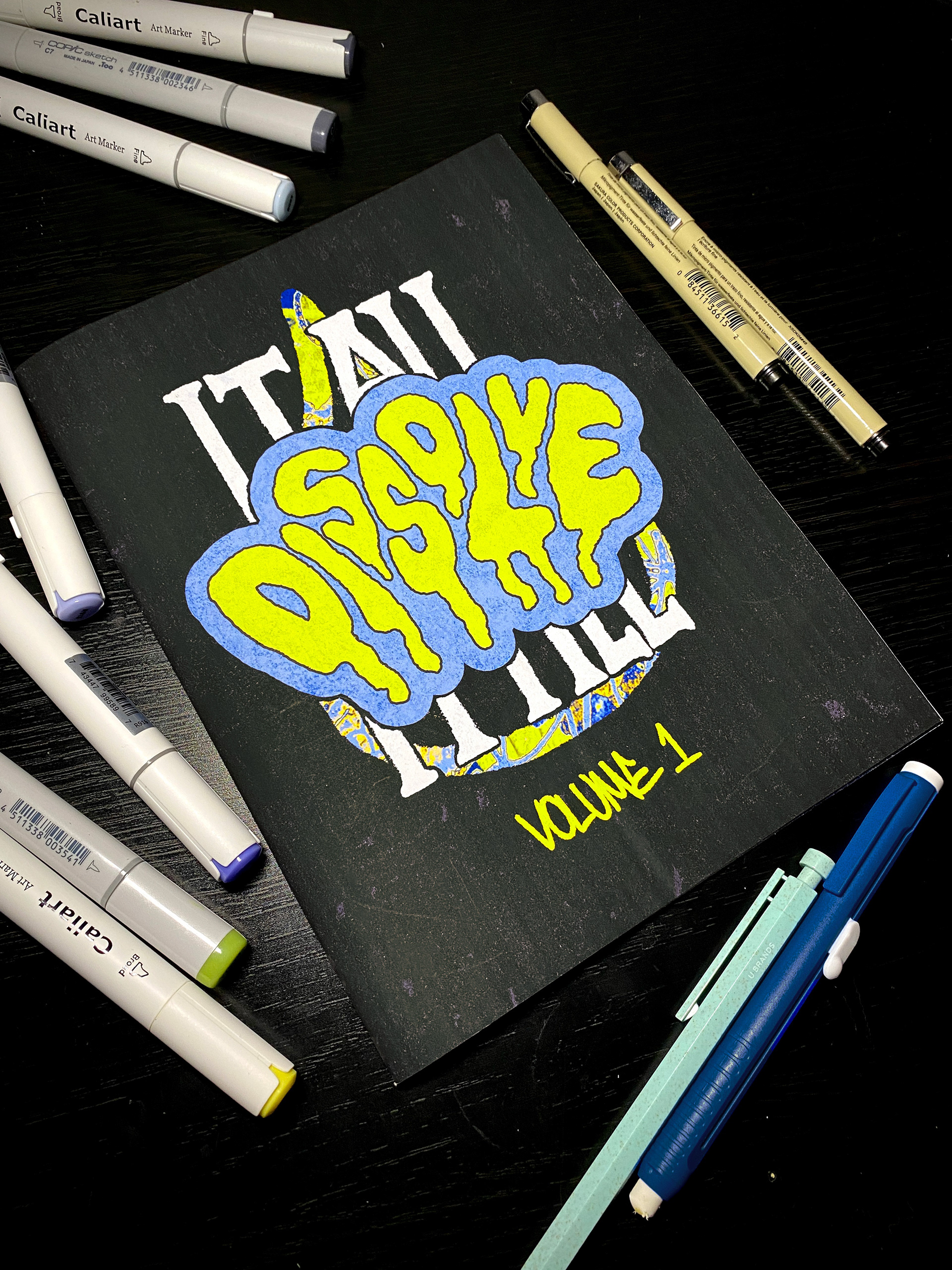 These are the front and back covers for 'Dissolve It All' Volume 1. Featuring the droplet motif and a colorful texture pattern included on many of the designs created for Dissolve, the front cover reflects much of the internal contents of this first volume. The back cover states where the zine was conceptualized, designed, and produced since location is a central theme to this volume as well as Dissolve in general.
SAMPLE ZINE SPREADS 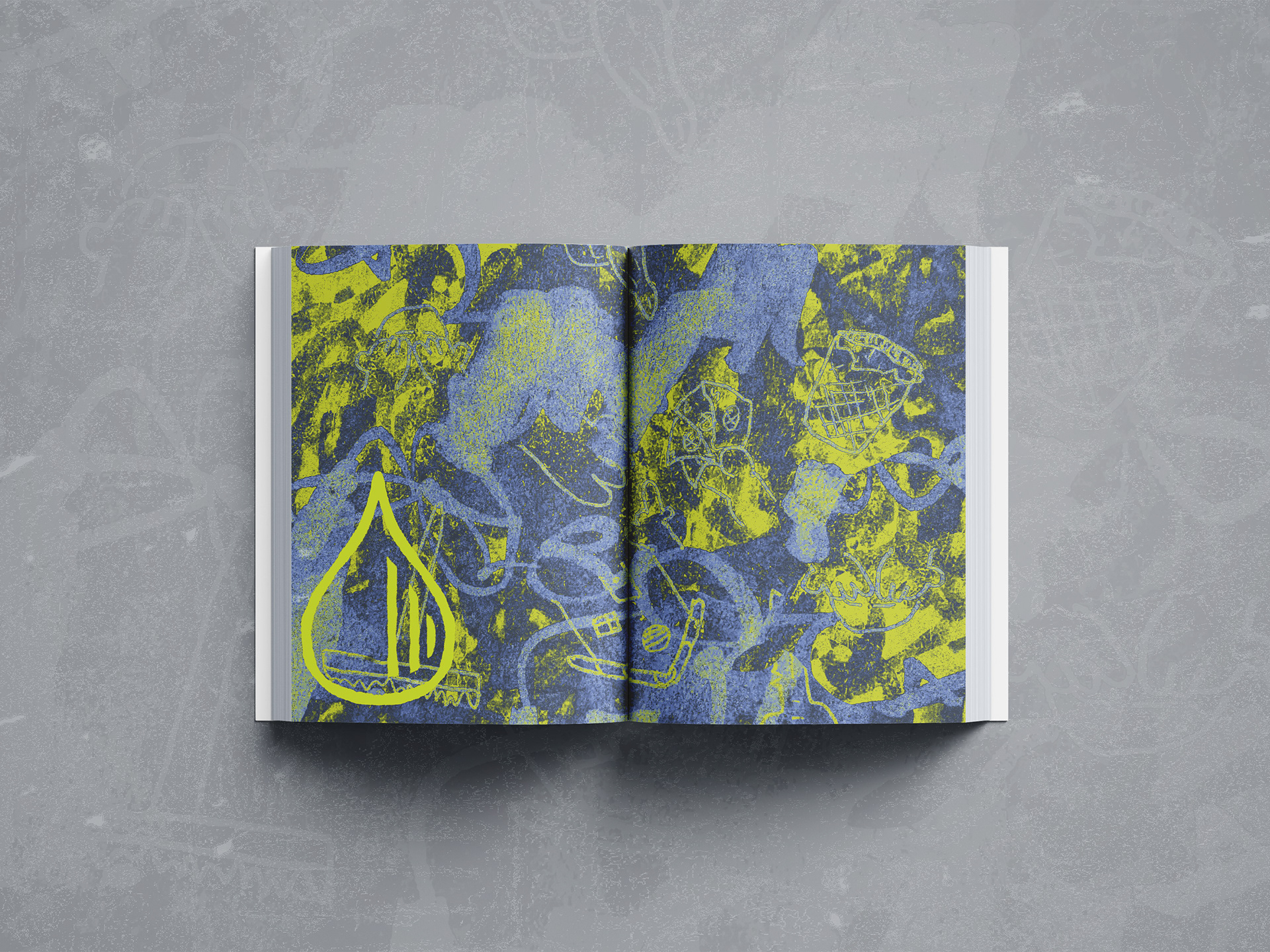 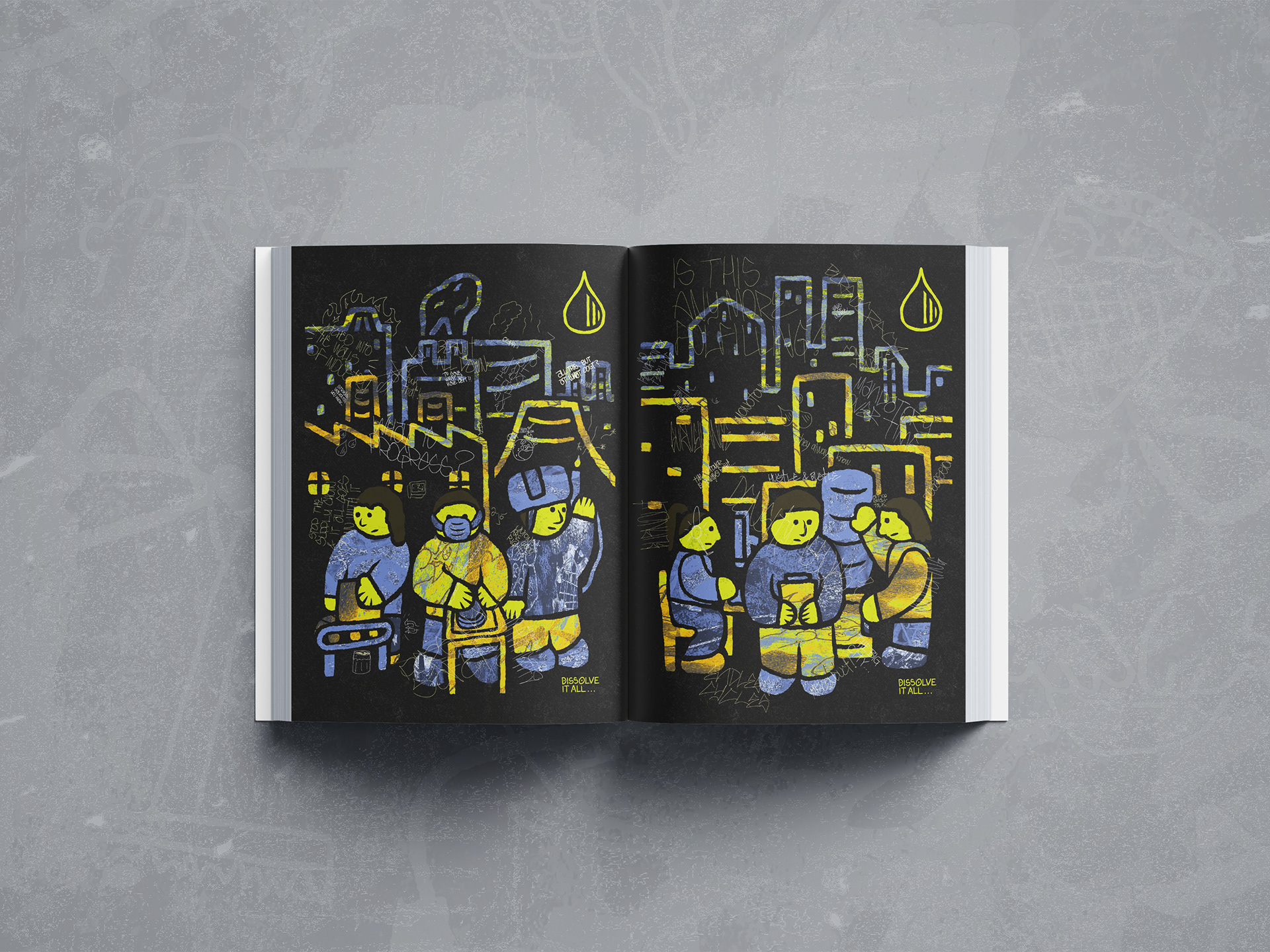 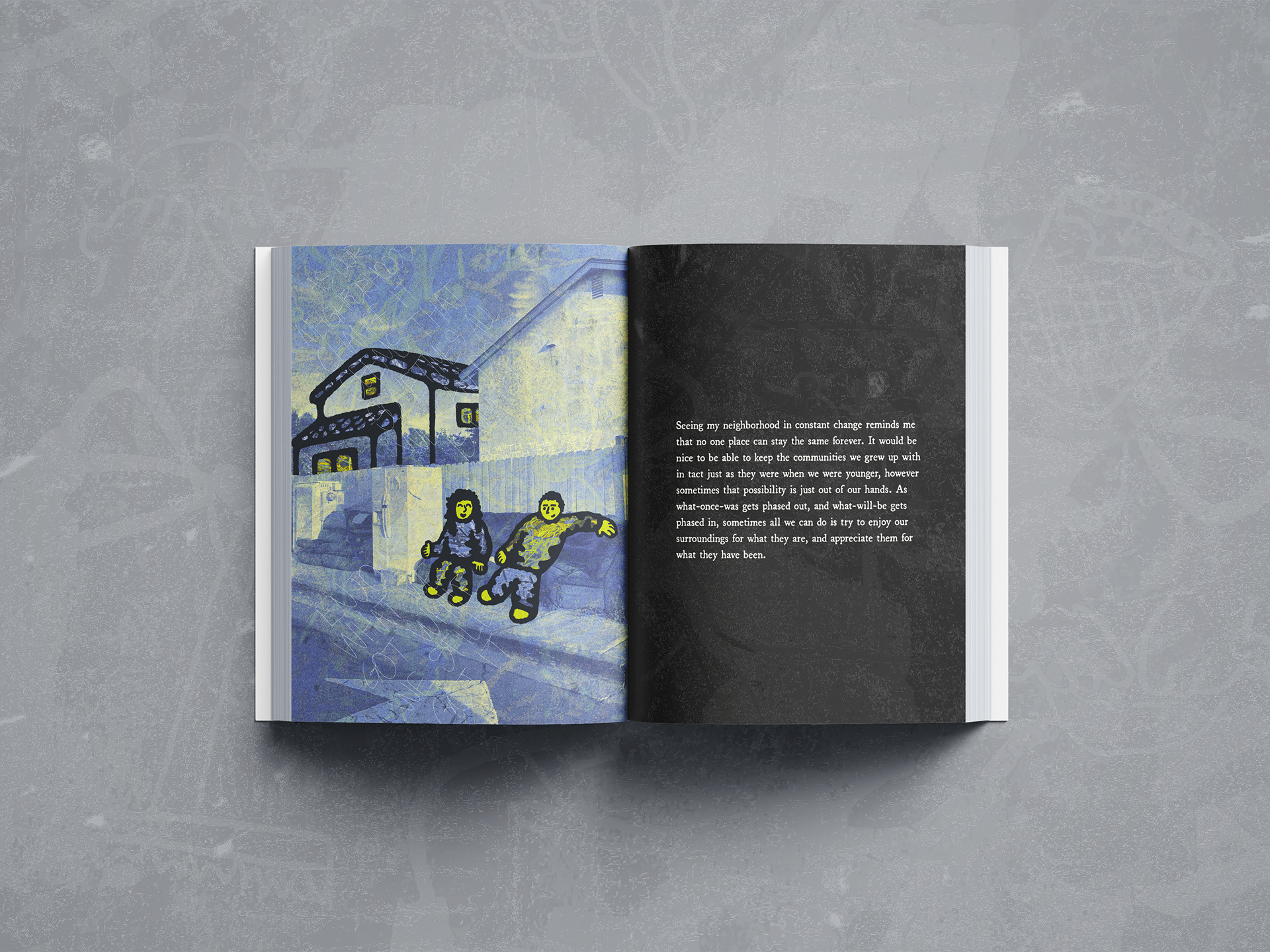 I tried many new techniques with the designs in this zine, from the ways of creating texture, to incorporating these textures within a digital illustration, to integrating them all with photos. I also played a lot more with layering type on top of the imagery and illustration in a way that reminds me of the layering of tags and other graffiti found on signs, electrical boxes, fences, etc.
PRINTED MaterIAL 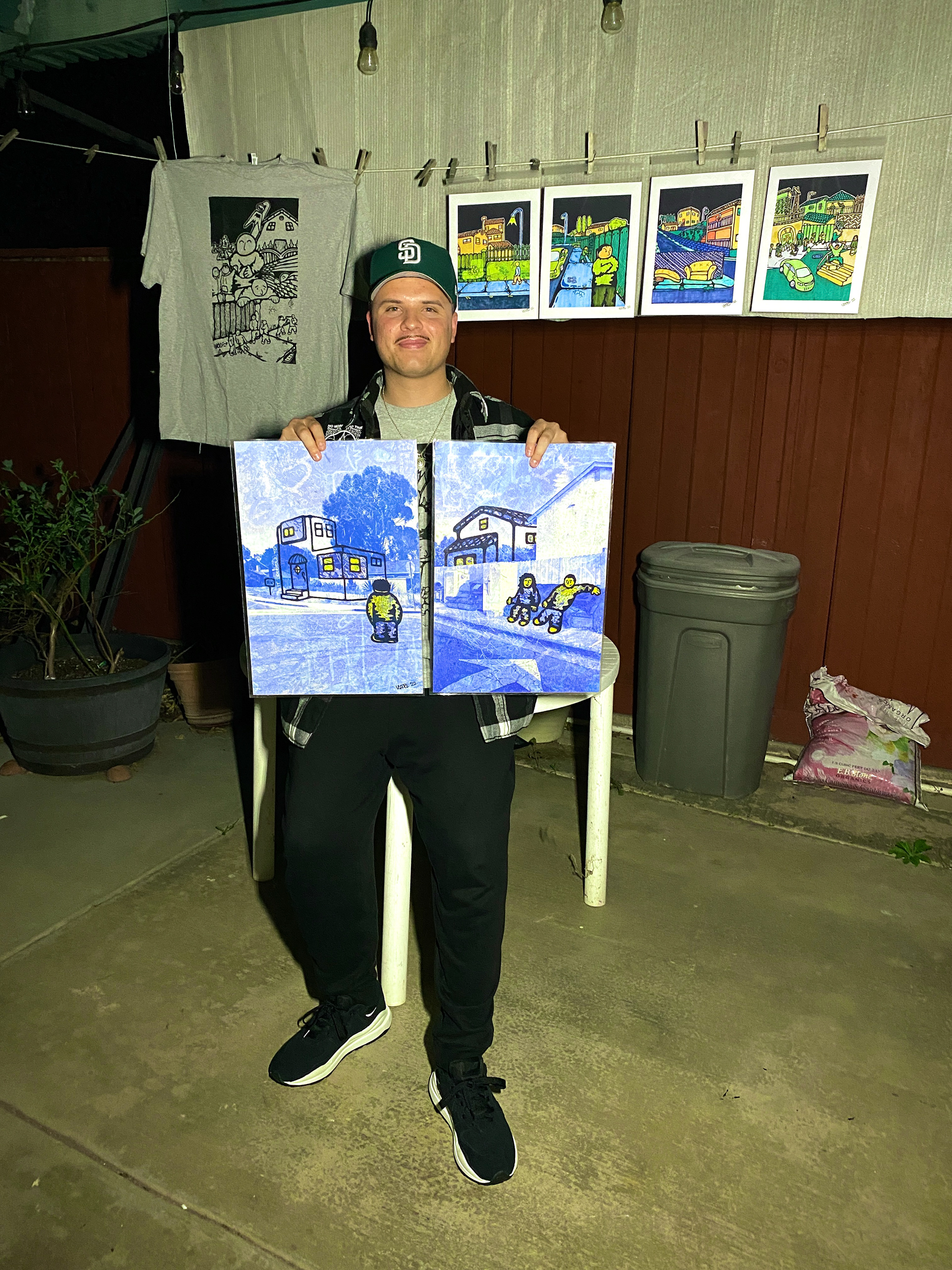 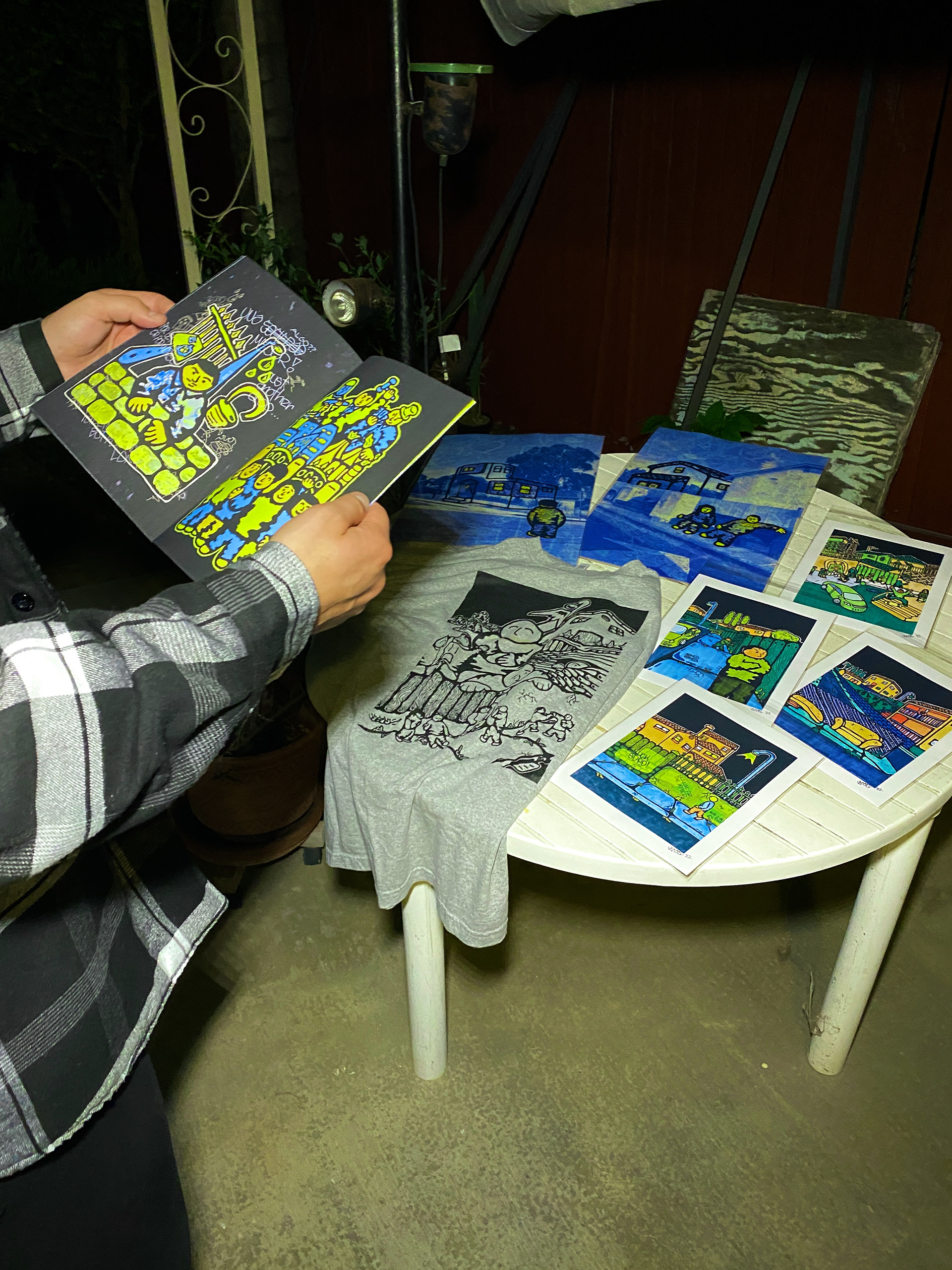 Here am I posing with some prints created for Dissolve as well as with a printed copy of 'Dissolve It All' Volume 1. These prints as well as others created from past illustrations were created for an art vending event that I took part in. 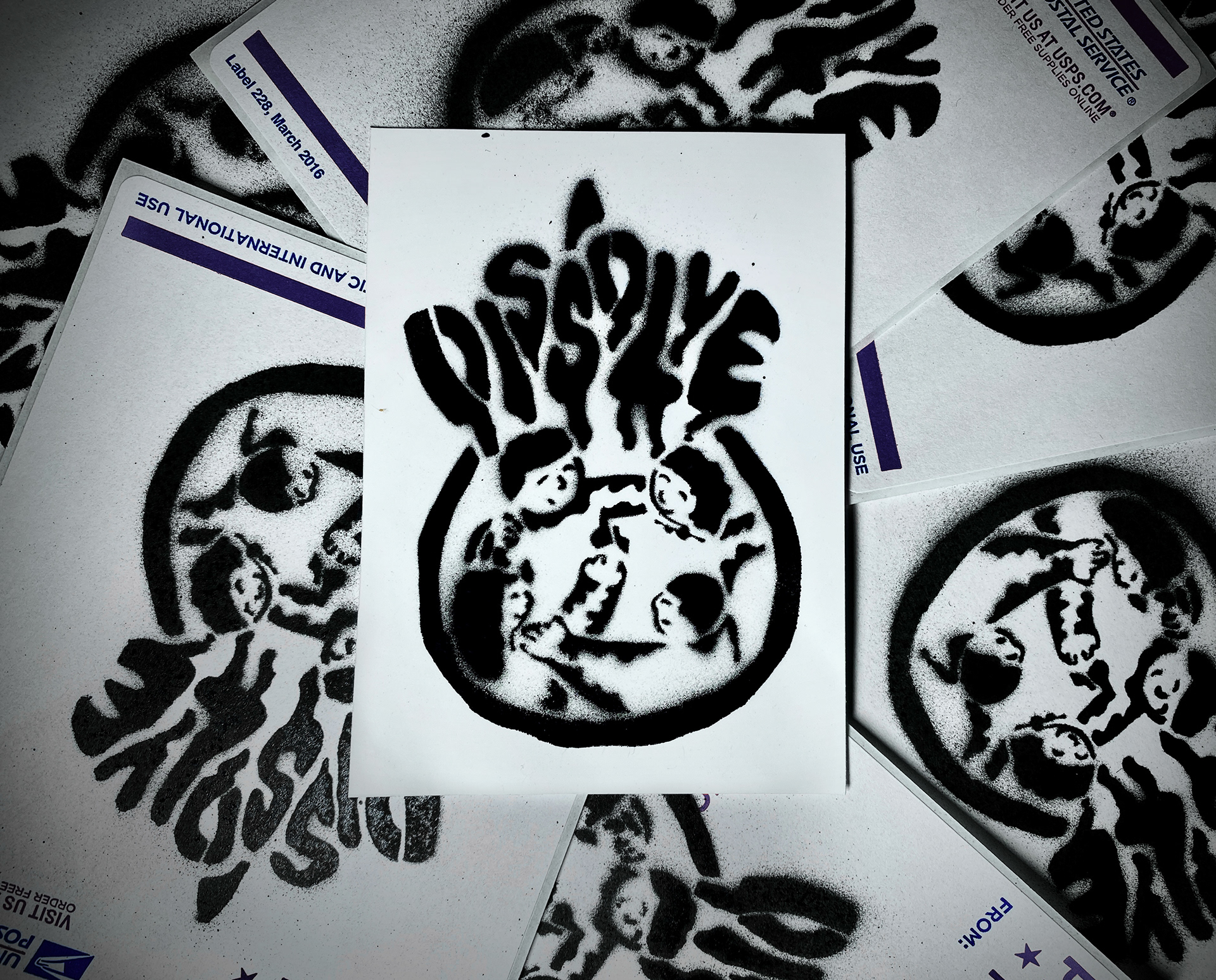 This laser engraving piece is 5 x 6.5" on 6061 aluminum. I had several of this size rectangles cut, and instead of passing the material through a line grain machine or bead blasting the material, I placed the pieces under the laser engraving machine and etched the entire surface front and back to achieve a cool, finished look. Then I etched the image of my illustration titled "What Could Be", from Dissolve It All Vol. 1. I wanted to branch out from simply doing prints on paper, and since I work at a machine shop with a laser engraver I thought it'd be perfect to bring some of my pieces to life with this method.

This accordion zine shows the 'Kickin It' series from Dissolve. These illustrations show scenes of friends gathered in random areas around my neighborhood, and casually having a good time and getting up a bit. This is meant to reinforce ideas of community bonds, especially with the messages that are being tagged in the illustrations. Since the zine depicts graffiti in the illustrations, I decided to make the outer side of the accordion just be a big pileup of words and phrases layered on top of one another, resembling the tags in public layered over time.
PROCESS VIDEOS
In the first video, you can see me creating the stencil stickers that were the initial concept behind the Dissolve project.
In the second video, I am displaying the process of creating the zine "Dissolve It All Vol. 1". Here I walk the viewer through all the steps I take from laying out all the elements on InDesign, then printing, and then folding, stapling, and finally trimming to end up with the finished booklet.
↑Back to Top